This is Part II of the Sacramento County District Attorney forum held on March 9, 2022. It is highly encouraged Part I has been read.

Among the questions were whether or not the candidates support the current Sacramento County DA, Anne Marie Schubert, who is running for California Attorney General and reports of sexual assault at Sacramento schools being ignored by law enforcement.

Q: “What is your stance on the controversy involving an increase of incidents of sexual assaults reported in the Sacramento area public schools? What would you do to address victims and members of the public who assert that there has been a failure to act by law enforcement?”

Ho: “I’ve worked with many of those victims. One of the things that we have to do is … when they’re reported, we need to take them seriously. One of the things that I purpose that we should do … we should have our advocates and our police go out and speak to the schools, speak to the community, the parents. Discuss at town hall meetings or panel discussions in the community so we can have a discussion. If this is a concern, we need to go out in the community and talk about it.

Mathews: “This is where listeners can see the difference between the two candidates. We are talking about young people being sexually assaulted, this is not the time to go to the community and talk about it. This is about going into the school district and dealing with it. We don’t need to have a conversation and I just don’t understand how after 20 years of experience or supervising experience, how it can be missed, the hurt, the harm, the trauma, or what these young people are experiencing. This is a cry, a cry for change. This is the time when we have to have leaders step up and say, ‘We acknowledge that there has been a failure in the system and where that failure is we’re going to fix it.’ If there is a person harming students in schools, they need to be brought to justice. If we’re spending time talking about it, nobody’s doing anything about it. These illustrate, so profoundly, the disconnect between the DA’s office because they can go in the courtroom, but where are they at in the community? It also illustrates the deep distrust the community already has with the DA’s office and law enforcement. Because they’re crying out saying nothing has been done about it. We have to have a leader who steps up to the plate and says we are going to do something about it. I am the person who will and promises to make sure we do that.”

Q: “Do you support civil oversight over law enforcement agencies? What role should the DA have over such processes?

Mathews: “Yes. When I talk about having prevention and intervention strategies, that’s one way we can do that, with an oversight commission. I’ve followed the proceedings and the findings of the Sacramento Police Commission and I’ve often heard them say they feel like they can’t do anything. I think the role of the DA is to work in partnership. If there is information that the oversight commission receives, they should be able to bring that to the DA’s office and have an investigation so that there is a feeling in the community that there is not only transparency but accountability. A lot of people have distrust. We’re not always going to get information because it makes the headline news, it’s going to come from the department. Having civil oversight commissions who are community leaders who are well respected, I think the information that they diligently, take the time to investigate, that there ought to be an off-ramp and a collaboration with the Sacramento County DA’s office because, as Martin Luther King said, injustice anywhere, is an injustice everywhere. 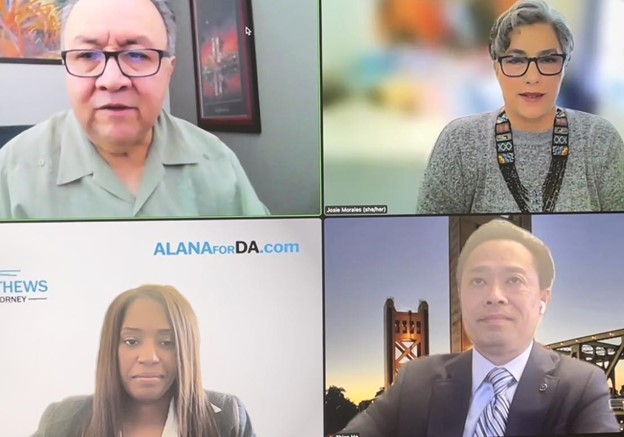 Ho: “These are important discussions that we should have with elected leaders, community members, and law enforcement. It should be based on expertise, experience but also community engagement. Step one is to develop trust. And when there is something brought to the District Attorney for accountability, we will hold people accountable for violations of the law. Based on the facts and the law, not politics but the facts and the law. We need someone who is trusted on both sides of the table to do just that.”

Q: “With reference to your respective knowledge related to her role as District Attorney in Sacramento, do you support the current DA, Anne Marie Schubert, in her campaign for California Attorney General?”

Ho: “ I have a pretty good idea of who I’m gonna vote for but in terms of that private choice being made public at this time, I’ll think about that and consider that in the future. Here’s the deal: at the end of the day the people who are going to decide that election are the 20 million voters in the State of California. At the end of the day I’m running for Sacramento DA, I am focused on our Sacramento community and making our criminal justice system better.”

Mathews: “No, and I’m gonna tell you why. I don’t think we are any safer than we were a few years ago. I think there’s deeper distrust and when we have distrust in the community, that’s when safety erodes. I think we need a leader who is willing to stand up and say what needs to be said. You’re right, at the end of the day, the voters will decide. But the voters also want to know if it’s going to be a continuation of what we have experienced over the last eight years. The voters want to know if anyone who says ‘I am going to bring change,’ is going to do it. Voters want to know if you’re accepting money from police officers, are you going to continue the record where officers are not held accountable for any officer-involved shootings. The people of Sacramento County deserve a leader who is going to be very open about the change we need and achieve that change. That is going to require a new approach, new ideas, and new solutions for achieving justice in this community. We have to have a leader, the next DA … that’s not afraid to say that there is going to be a departure from what’s failing currently in the Sacramento County justice system.”

Q: “In what ways would you like to see the County utilize realignment funding and how would you advocate for such uses as the District Attorney?

Mathews: “I would like to see the funding allocated to more community-based organizations. I’ve worked with a myriad of people like Daniel Silva, who does self-awareness and recovery. Advanced Peace, they have programs. All of Us or None who are working with the reentry population. Alameda County distributes 50 percent of its funding and these are organizations that are producing tangible results. It’s not about experience, it’s about results. That’s where the part of the distress comes from because we see the same people, getting the same money, doing the same thing, and getting the same results. And nothing is changing. We need change.”

Ho: “I think we need to take a significant portion of that and deal with mental health and drug treatment. When we’re talking about preventing crime, when we’re looking at the root causes of what causes crime, it’s oftentimes involving mental health and drug addiction. We need to put the funding there. This is the fundamental difference between my opponent and myself. I’m not sitting giving catchy buzzwords, slogans and making promises. On my website, I’ve provided very specific examples of what I want to do. One of those examples, because I am someone who has and will, provide solutions and answers. When a person is convicted of a crime and serves time, before they get released they get evaluated by the probation department with a risk-need analysis. That’s done on the back end in Sacramento County, we need to move that on the front end. So we can figure out what it is that makes them commit misconduct. We need more funding for that so we can deal with that particular situation.”

Alana Mathews: “Every Vote Should Count”

Sacramento – “Sacramento County had a higher voter turnout than the state average. Over 250,000 people voted in our county, but only 107,601 have been

Voter guide created by Black women meant to help all

Black voters were called a ‘monolith’ by President Joe Biden while he was campaigning and he ended up apologizing for it, since his comment generalized that one large group of people see political issues the same way.

John Legend wants you to vote in Sacramento County’s DA election. Here’s what’s on his mind

A lot of celebrities use their platforms to share their thoughts on national politics, urging their fans to vote in big-ticket races like U.S. president or governor of California.

The Sacramento Bee Editorial Board endorsed Alana Mathews for the next District Attorney for Sacramento County last week.

There’s one month left before the primary election where Sacramento County’s next District Attorney will be decided between Thien Ho and Alana Mathews.

Get the latest news from Campaign HQ

Anything you can give will help us
get Alana elected.
CONTRIBUTE

We need your help to win this!
Find out how you can be a part of the team.
SUPPORT ALANA